Have you ever just had a really bad week where everything just keeps going wrong? And you don’t think that there could be another thing that you could handle?  The week our master closet collapsed was one of those weeks!  Let me tell you about the event that made my master closet makeover come to life!

I know that it may not seem small, but our closet is only 12′ x 8′.  In a house of this size, I would expect the master closet to be much bigger, but I am not going to complain about the size.  I am grateful.  Yes, we are blessed to have a walk-in master closet, but it was a crammed space with wire shelving.  I absolutely HATE wire shelving.  I think it is the worst and I want to rip it out the second I see it!  If you have it in your home, you know what I mean.  When we built the house in 2015 I didn’t want to spend the dollars to upgrade to what the builder considered an upgrade so I just left the wire shelving as is in the master closet and I was going to do something with it at a later date.

Fast forward to Spring 2016.  One morning my husband and I were standing IN THE CLOSET TOGETHER getting our things for the day and I felt a sudden rush of wind behind me.  The entire wall of wire shelving, both top and bottom racks, collapsed.  Literally RIPPED out of the wall!!  The fact that neither one of us got hurt is a miracle.  With all of the shelving, clothing and the dresser in there was only a couple of feet to stand/walk in and we happened to be just far enough over to not get hit by the shelving.  It included shoes and a ton of clothes.  Who installs a continuous 11′ wire shelf and just hammers a few drywall anchors in??  That was a mistake from the builder but it also may be attributed to the copious amount of clothing we had hung on there…just saying. 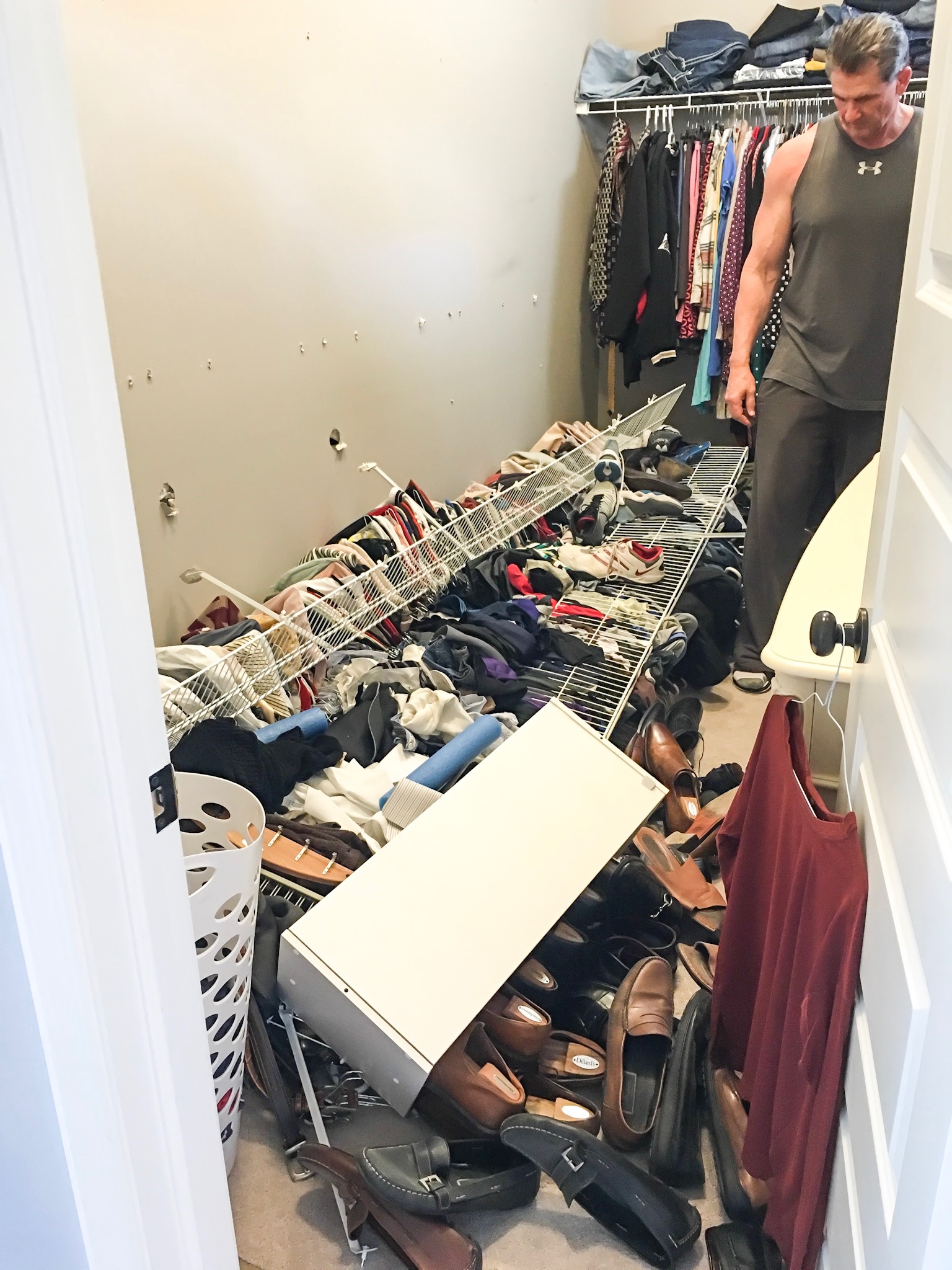 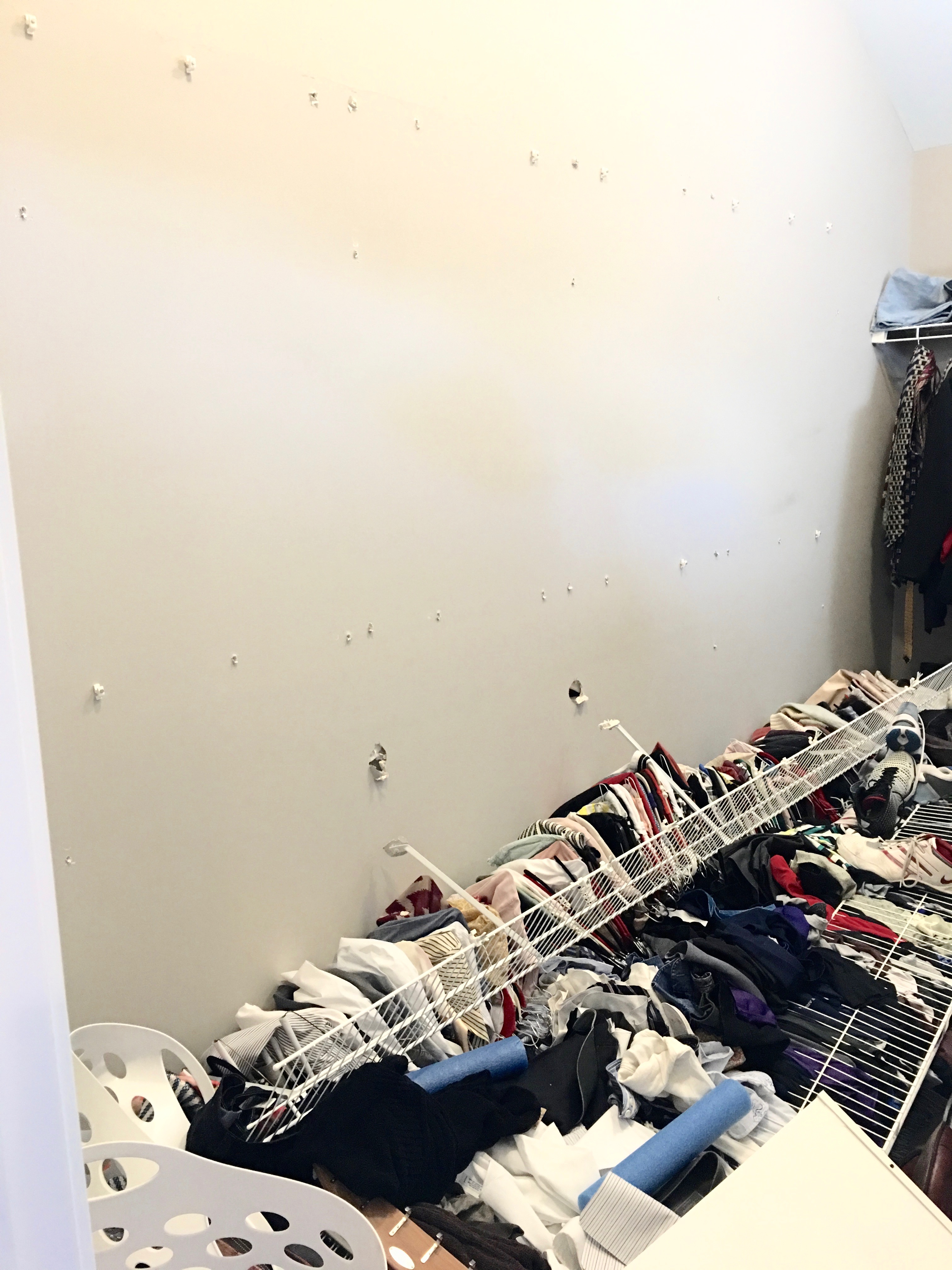 This event propelled me to finally do something about the wire shelving that I had hated since we moved in.  I hadn’t done anything about it yet because I didn’t know what I wanted in there and it would mean that our room would be a complete mess for a while.  I wanted it to be the “right” time to do this project.  But, on this day I was forced to move on it so I took everything out and got busy making a plan.  Look how the drywall has holes in it from the shelving ripping out of the wall. 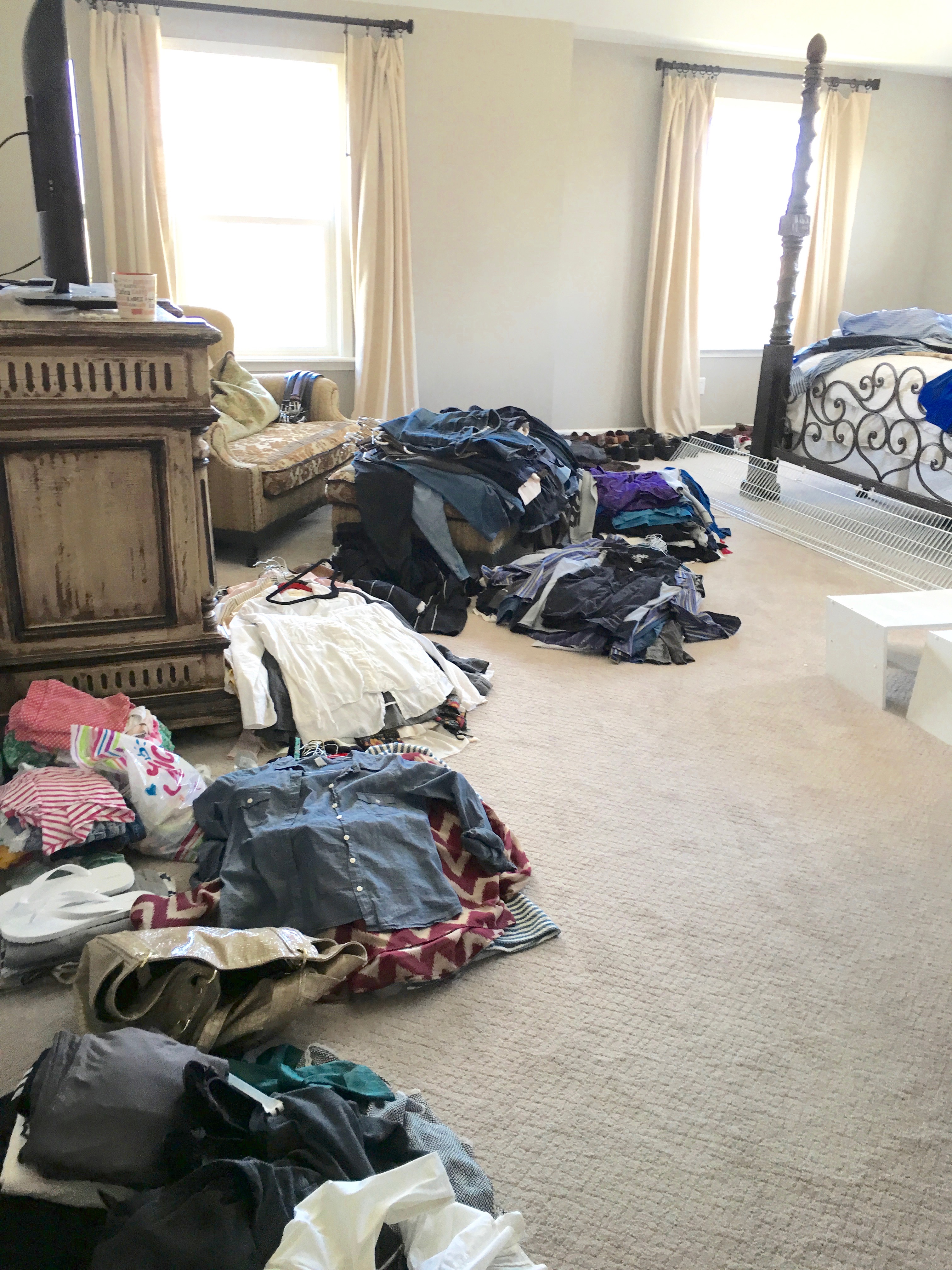 Stuff was EVERYWHERE!  This is just a glimpse.  I had to bring in some wardrobe boxes and plastic shelves from the garage.  I also moved all of my husband’s business clothes to another room and find other methods of temporary storage for our things. Then I got to work!  My dreamy master closet was going to come to life!

The closet, as it was, was an uninspired space that was just a storage space for clothes.  Walk in, get what you want, and RUN out!  We had our daughter’s old dresser, plastic drawers and mismatched hangers in the narrow space…just a few of the issues. 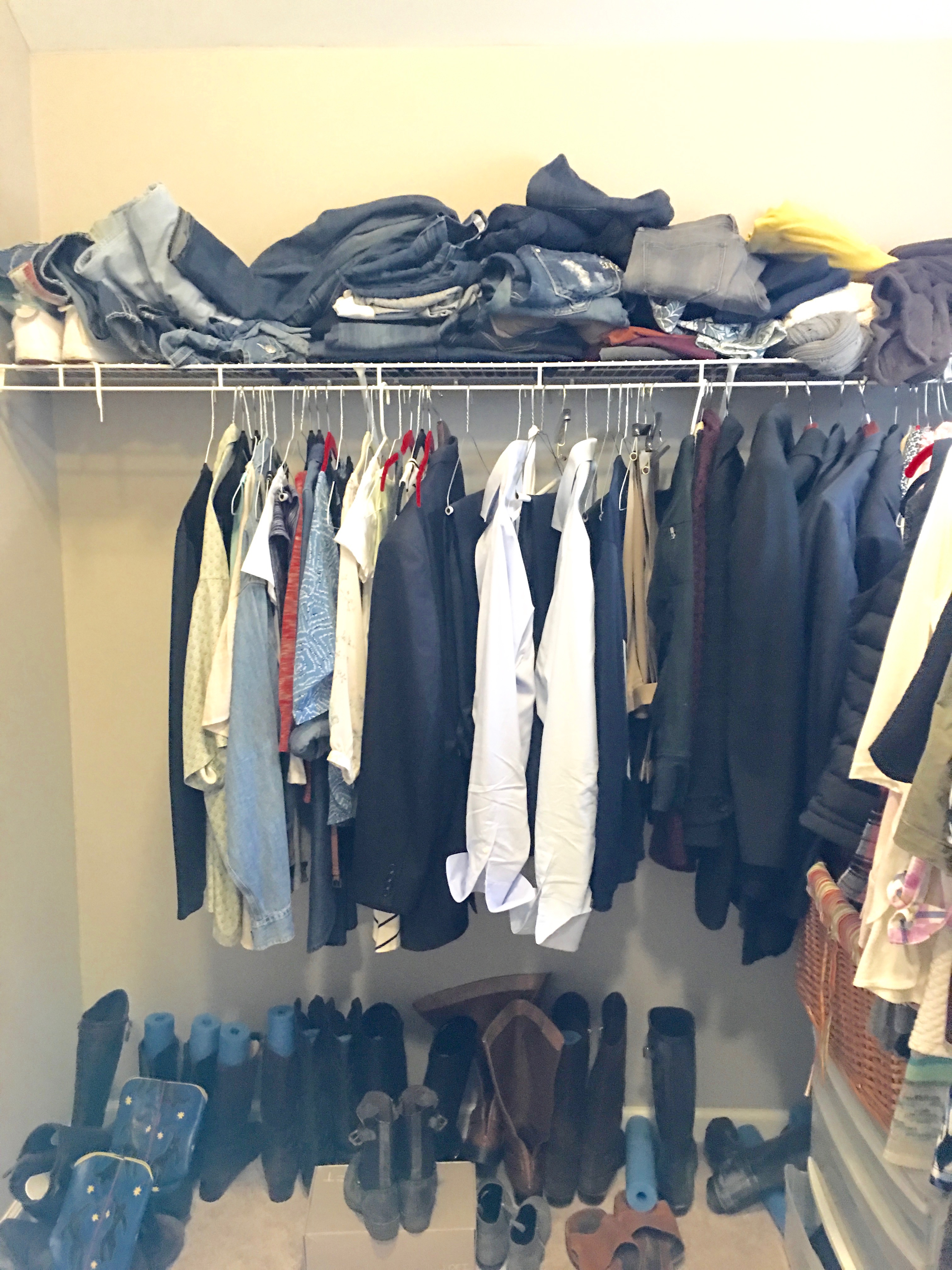 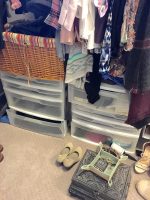 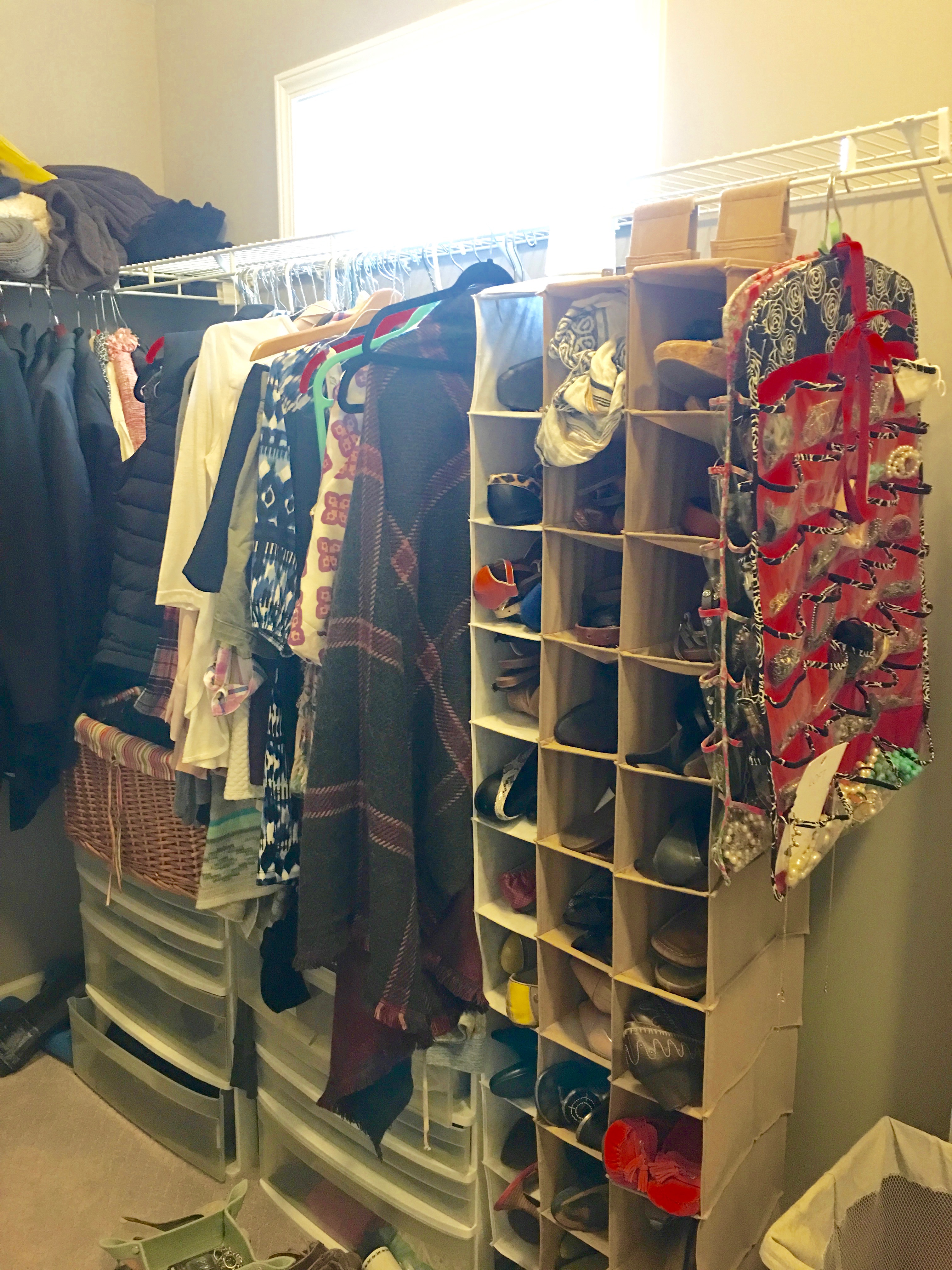 This was so happening!!!

I knew I would be able to apply the skills I had learned and developed from the craft room I built so I started to sketch a custom plan for the space.  With all of the things out of the closet I was able to get precise measurements and start to dream.  Yes, I thought about installing ikea shelving but none of what I wanted was the right measurement and there would be a lot of space that I wouldn’t be able to use so it would be wasted.  I also considered Elfa shelving from The Container Store but it was too expensive for all of the special things I wanted to incorporate in the room. I wanted to maximize the 96 sq ft I had to work with so the only other choice was to custom build it!

The next post will have the design I had come up with and I will explain the things I had to do to make this dream come alive!  Stick around for part 2. This won’t be a beautifully staged series, but one of construction and real life, lol!   I hope you have a great week ahead!  Dream big!

While pulling out my Fall decor I found these pump

Kids are amazing AND they are always watching and

What are you afraid of?? Me? I was afraid to trans