Does that title make you think “vintage”?  It makes me FEEL vintage to look back at pictures of the amazing experience I had as an NFL cheerleader.  A Denver Broncos Cheerleader. Especially after spending this past weekend with the current cheerleaders of the team.  And I am not even THAT old!

I auditioned for the Denver Broncos Cheerleaders in the Spring of 1997.  Some of you may not even have been born then!   I remember the pressures, the hopes, the dreams and the nerves during that time and I remember that there were 500 other women who felt the same way.  I didn’t know that some of the best women I would come to know were in that room.  Mothers, lawyers, teachers, nurses, therapists, women with Masters Degrees, entrepreneurs, business owners, and media personalities.  All really bright women that inspire those around them.  I also didn’t know I would be reconnected with a girl I knew in middle school and hadn’t seen in years.  Kim and I were both in our 20s now and she would quickly become my best friend.  We had a lot in common including being married with babies. 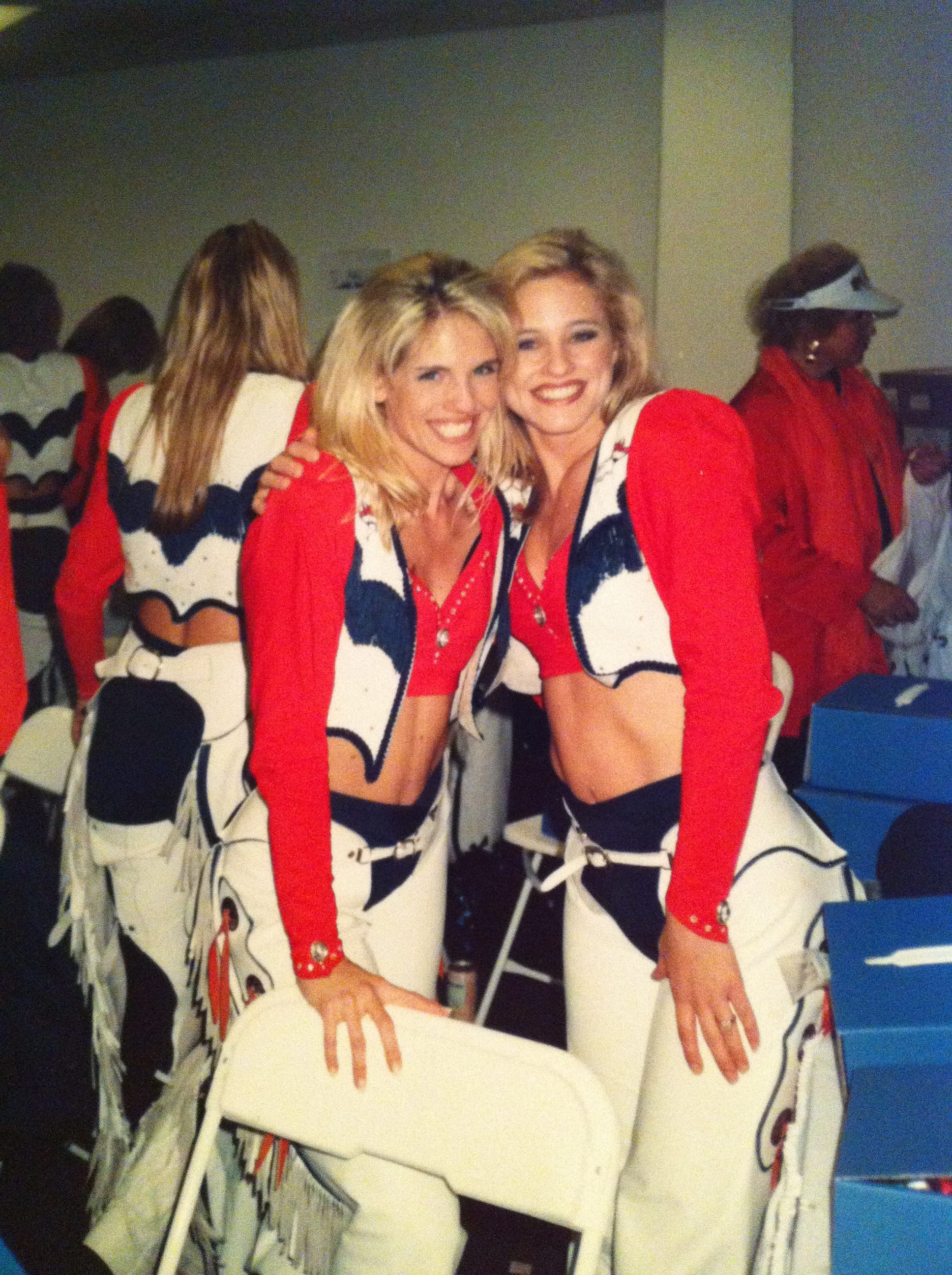 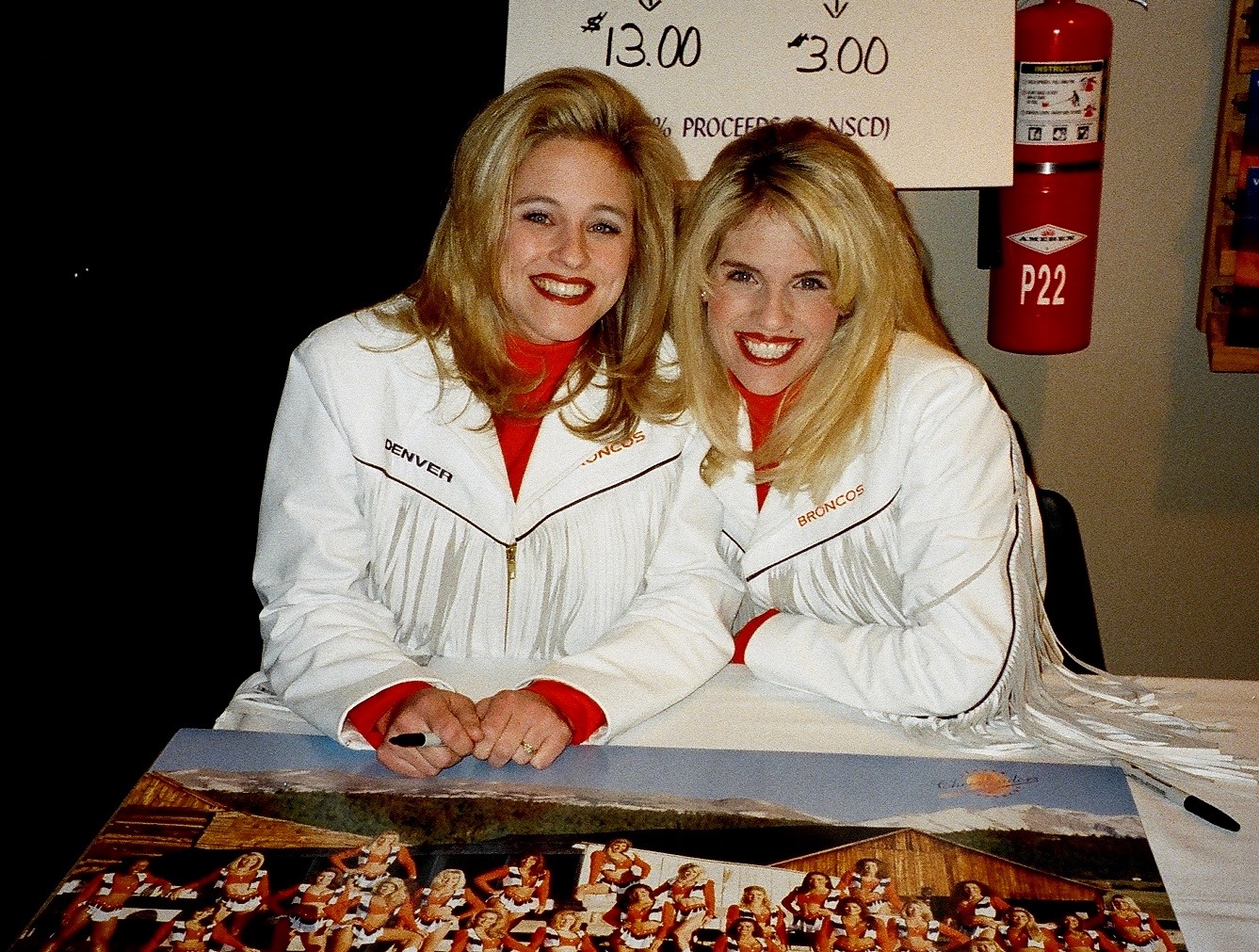 Having a family posed a challenge but we were willing to work it out.   I had grown up dancing, was captain of my pom squad in high school and had an opportunity in front of me to audition.  I was talking with a friend who was a cheerleader the previous season.  I shared with her that I would love to audition but was just too nervous.  I had auditioned for things before and had success, but for some reason this was different. This felt bigger. She was going to audition again to be part of the upcoming season and she gave me the courage to audition, too.  Of course, I didn’t think I would make it but I was hopeful and had nothing to lose.  The opportunity was there and I never wanted to look back and regret not even trying.  I thought that if I just auditioned and didn’t make it, at least I tried.  I am kind of nutty like that.  I will try something even though I am afraid of it and don’t expect it to go well.  Except skydiving.  I will never go skydiving. And eating bugs….I will never eat bugs.

On the way to auditions with my friend, Dea, we stopped to pick up Krista who was another cheerleader from the past season. Krista  would come to be my “business partner” on the team.  When we went in to get her, she looked beautiful.  She wore a bubblicious pink outfit that made her tan body look amazing, her teeth look a shade of white I had never seen and made her eyes sparkle.  She looked at me and said “Is that what you’re wearing?”  Um….yeah.  It was. It was nothing special, just some dance gear I already had.  She offered me an audition outfit that was blue crushed velvet….Bronco blue.  I reluctantly put it on…she said “much better” and we were off to auditions in Bronco-blue crushed velvet and slouchy socks.  I remember thinking that I didn’t compare to these women and the nerves really set in.  Too late to turn back so I forged on to bring the best that I could bring. 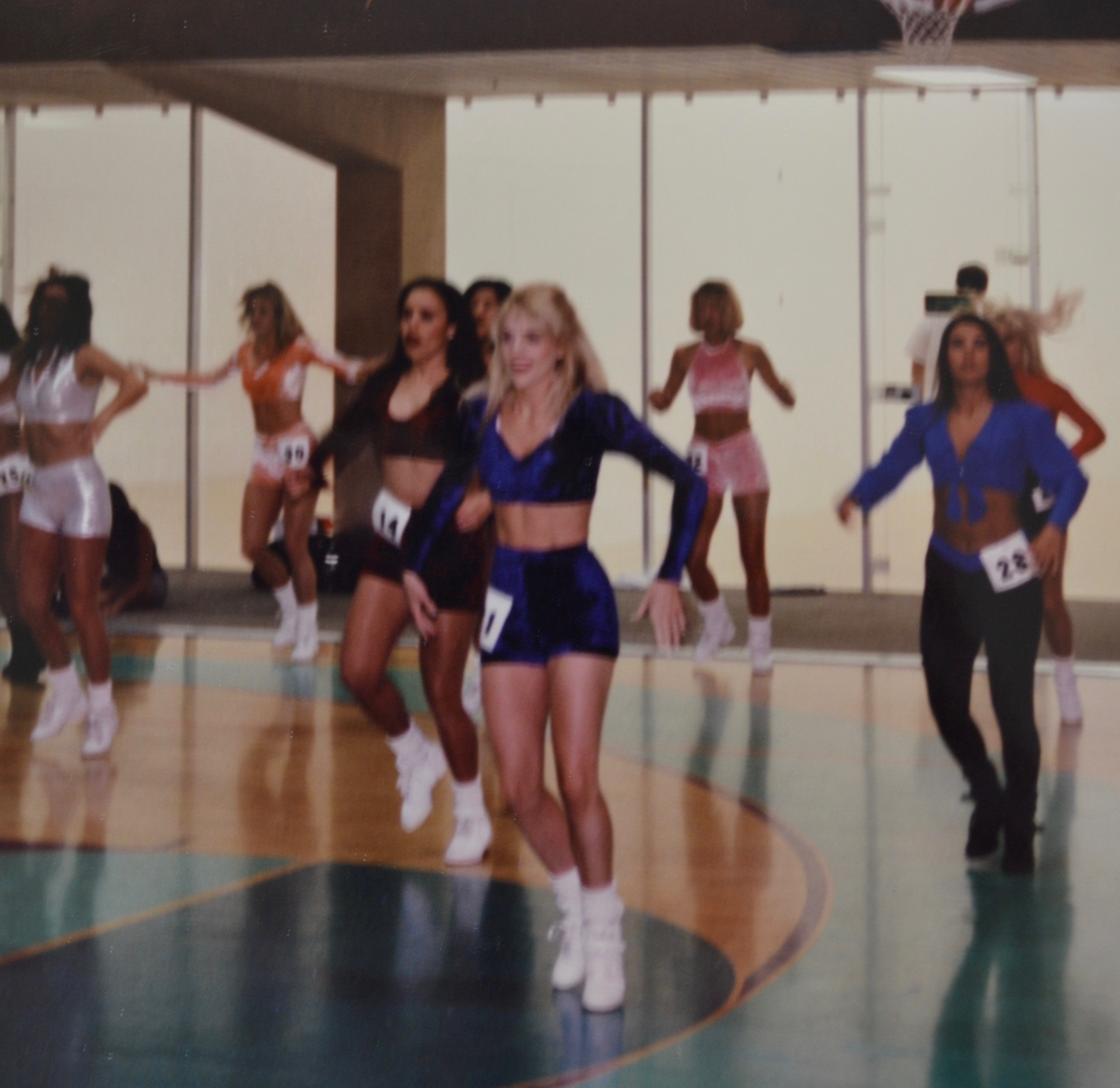 Auditions were in a fitness center and we would be dancing on a huge basketball court.  Some women were decked out completely with big hair and lots of make up, some had seemingly rolled out of bed and shown up.  Some were in leg warmers (the 80s called and wanted them back), some wore little, tiny shorts and we all wore big slouchy socks.  Every woman was different, every woman was bringing her best, and we all had one goal.

A lot like todays auditions for an NFL cheerleading team, we learned an audition dance as one unit.  We all encouraged and helped one another.  I never experienced anything other than kindness.  We didn’t have cell phones to record or to cry on our friend’s shoulder.   We only had each other.  We learned it all in one day and would come back the next day to show them what we had learned.   We would chaines (sha-nay), kick ball-change, padabure (pod-a-booray) and jazz walk across the court one by one.  We would dance in front of a panel of judges.  It was such a bold thing.  Of course, now it is so different.  Auditions are televised, there are tickets available for purchase to watch, people can vote for their favorites via social media and you can even watch a reality show about it.   But, the pressures and nerves are all the same and it is still a bold thing.

The judges narrowed it down to the top 50.  The following week we had to come back in business attire and sit through a panel of judges asking us questions-one by one and in front of everyone.  We had to have a good knowledge of football, world events and newsworthy subjects and show them how we would represent the team.  I think we may have even had a written test but that I can’t be sure of.  We would dance again (not in our suits) and then come back the next day for the final decision.  I couldn’t believe it when my name was called.  I wasn’t sure that I heard it right.  An incredible feeling of happiness and disbelief rushed through me and I remember getting a jolt of adrenaline from my head to my toes.  I was about to embark on an exhilarating time in my life. 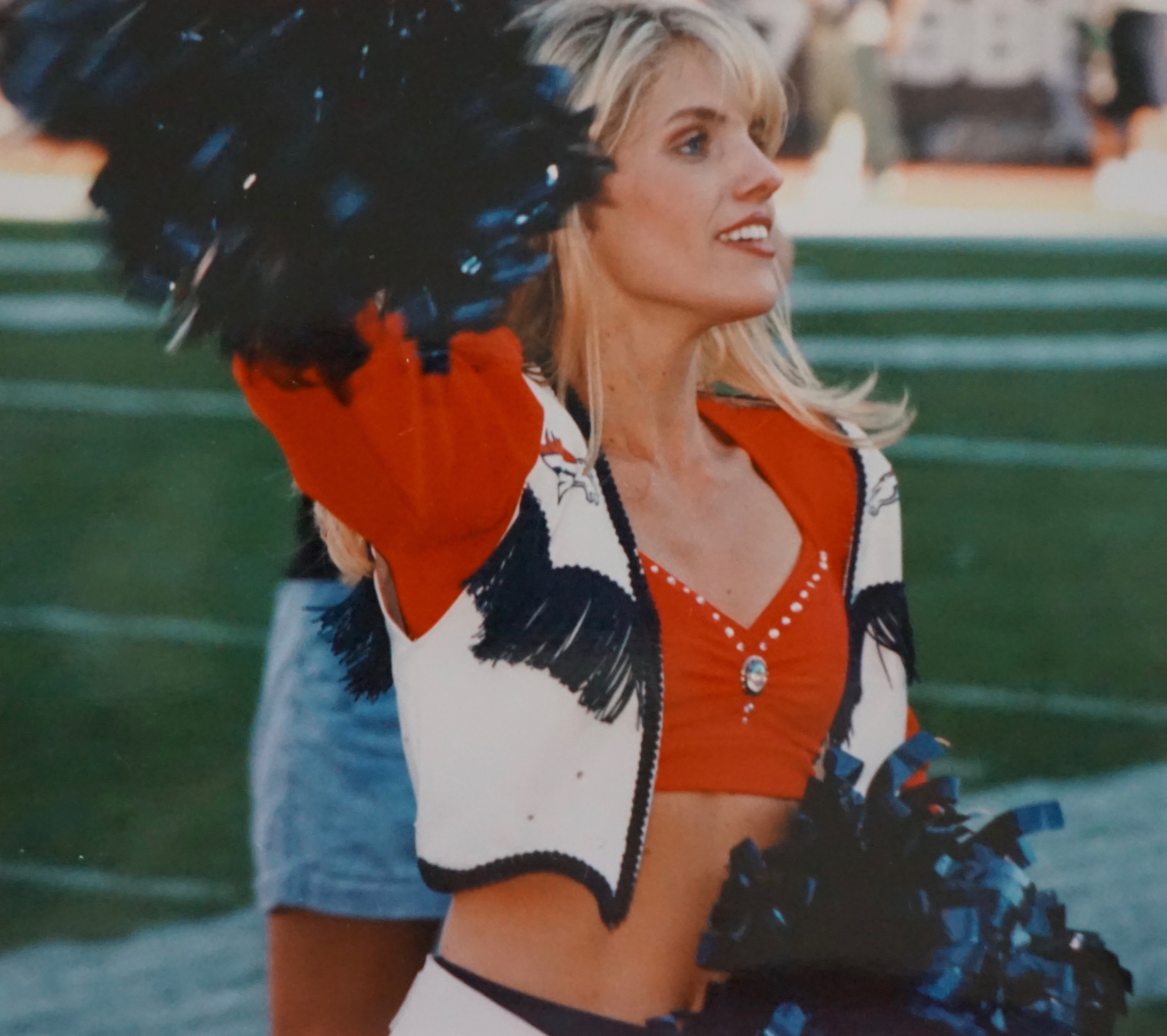 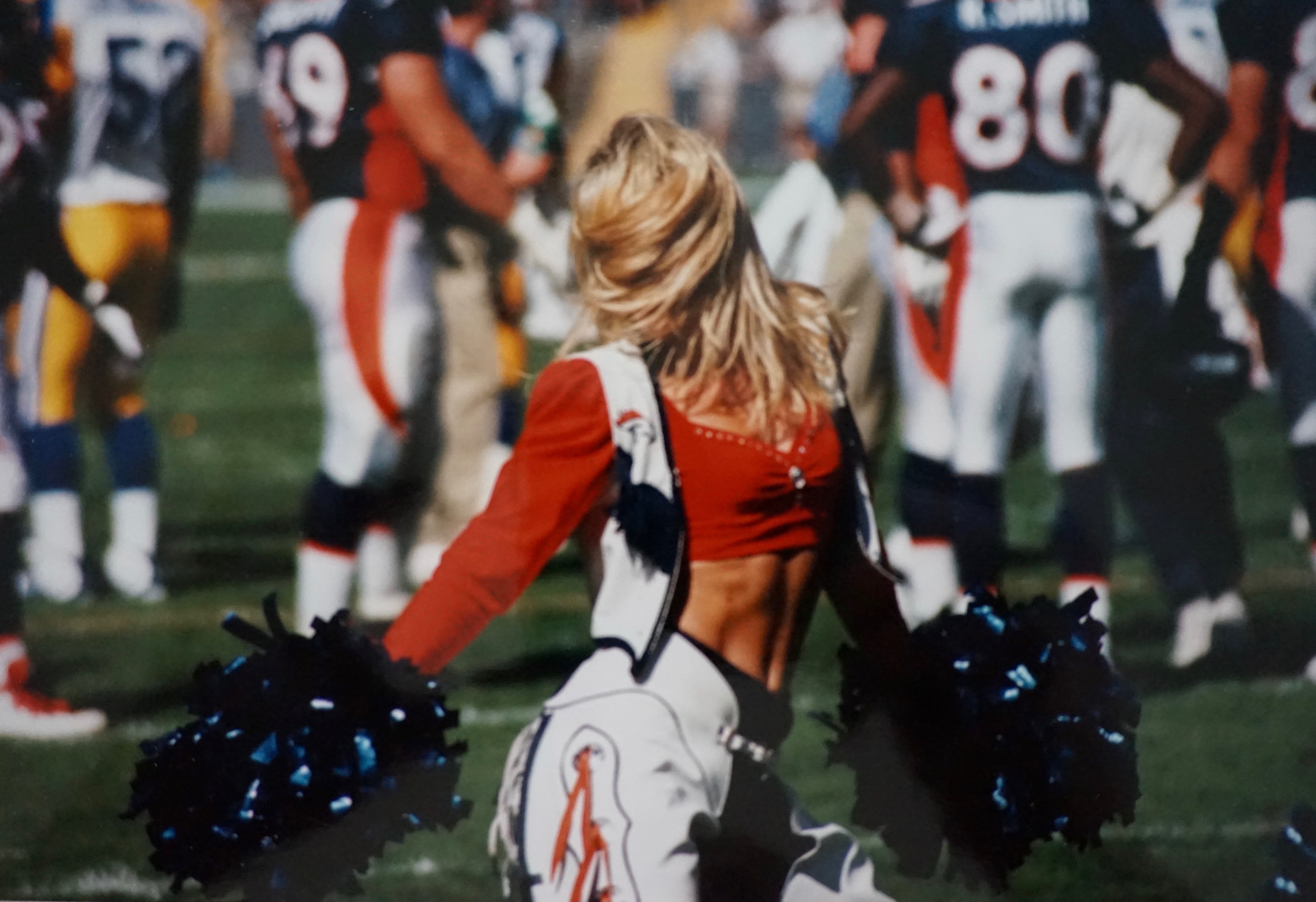 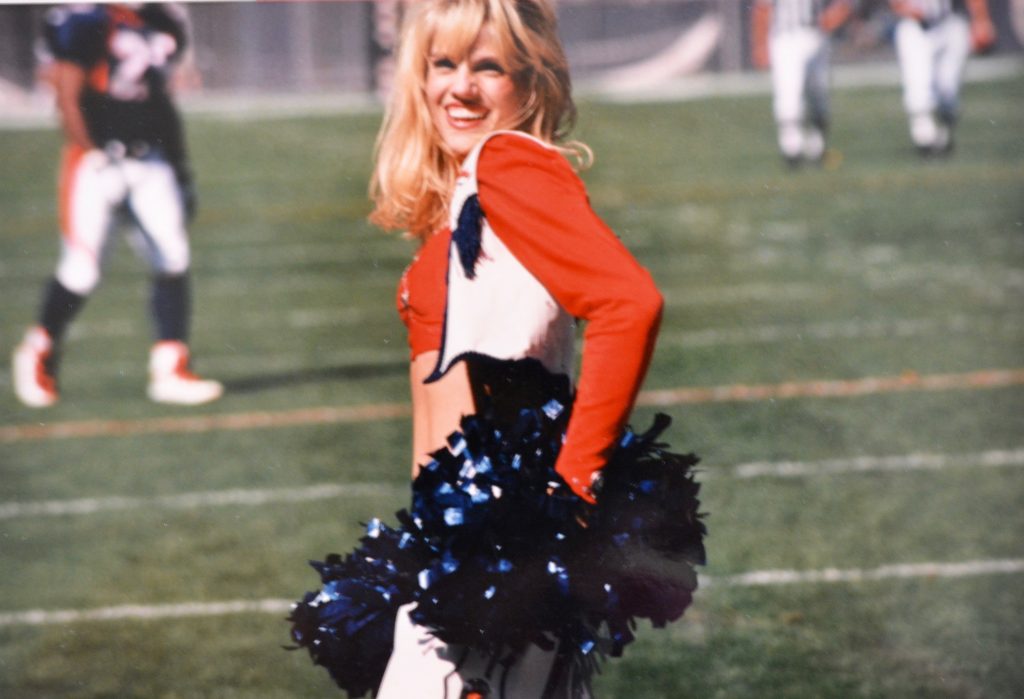 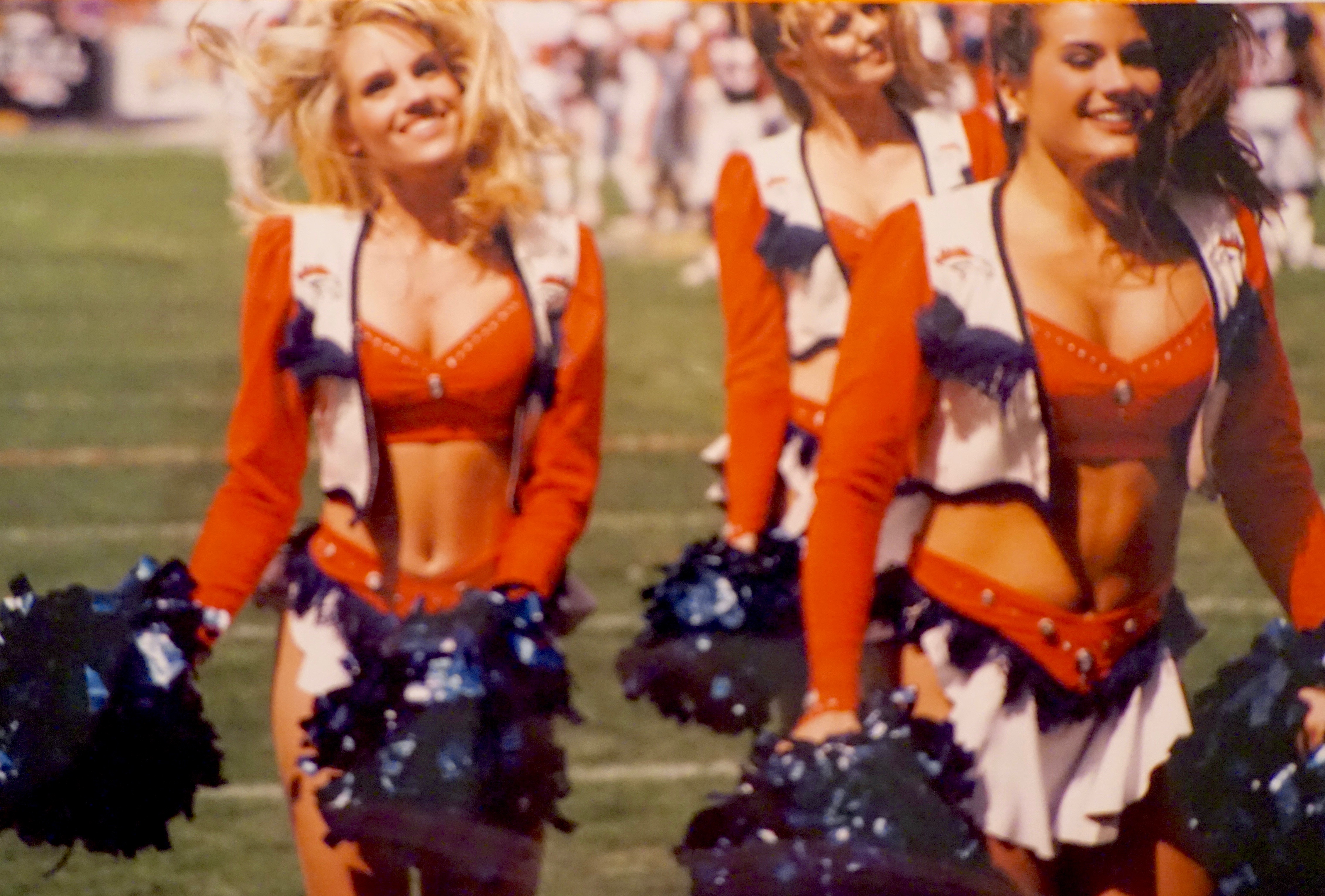 I didn’t know what the time on the team would bring but it turned out to be a very special time in my life.  While on the team I got to do so many incredible things. We had beautiful photo shoots and were on posters and calendars.  I got to go to Mexico City with the Broncos for the American Bowl against the Miami Dolphins, which was such an experience.  Their stadium holds over 100,000 people and it was PACKED-every seat!  That was a very special game.  The Broncos organization hosted parties and events that were superbly done.  Every week I got to sign posters for fans and sign pictures for little girls who just couldn’t wait to meet us.

I got to give my time to so many people, adults and children alike, and participate in charitable events that made a difference and had an impact on the community.  Visiting Craig Hospital was a very memorable experience.  It is one of the country’s top rehab hospitals and I got to meet patients who had severe injuries to their neck and spine and were left paralyzed in some capacity. The whole hospital came alive when we walked in with our chaps and fringed leather jackets on (which is iconic to Denver Broncos cheerleaders) and it was so fun to be part of that.

Then there was Children’s Hospital.  As a mom, my heart was broken and full of joy at the same time just seeing the sweet faces of the little warriors and fighters who called that place home.  It felt good to be a ray of sunshine in their lives. It was so wonderful to watch the parents melt as they saw their child smile.  Countless hours had been spent sitting, listening, loving and making a small difference with people around the city of Denver.  Hours upon hours were spent with these 20+ women that were my family away from my family.  The laughter and camaraderie built makes DBC a special sisterhood. 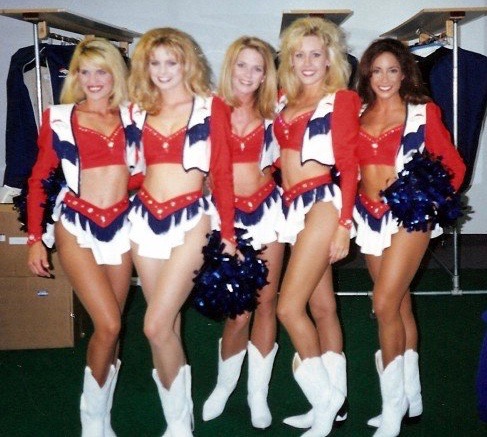 While on the team, we had the experience of dancing at the Super Bowl on the sidelines and seeing that final touchdown that catapulted the Broncos to victory.  We got to be on the field to where we could smell the grass and hear the helmets crash into one another, got to dance our hearts out at the halftime show and got to go to a huge celebratory party afterwards.  We had the opportunity to watch Hall of Famer, Terrell Davis, in action up close and personal.  I got to be on the field when the confetti came pouring down in blue and orange and the brilliant, lustrous Lombardi trophy was being passed around. We watched John Elway and Pat Bowlen make their victory speeches and be interviewed up close.  And, yes, we got to wear our big hair! 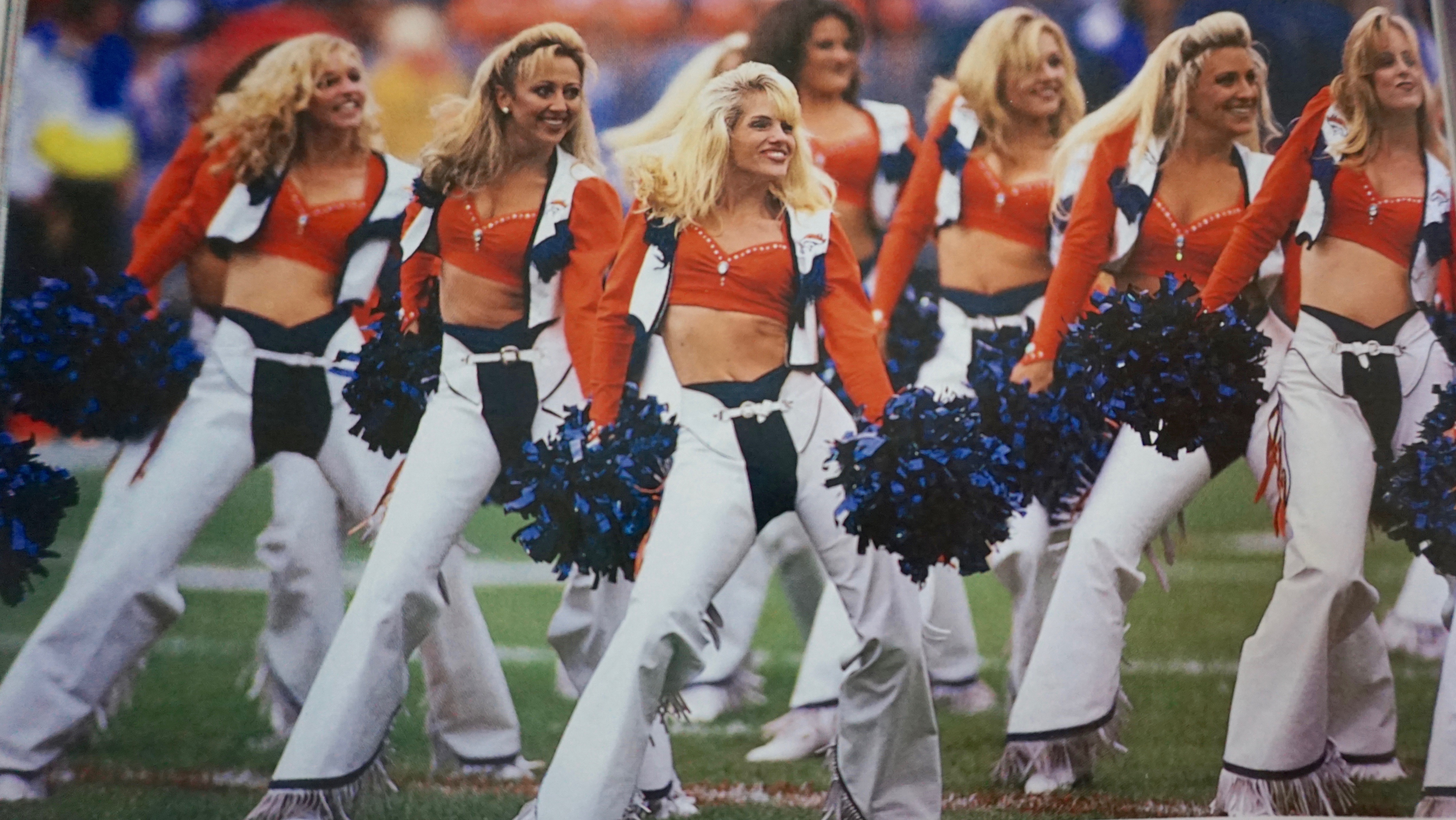 My husband and I got to go together which made the whole trip so much sweeter. We got to experience a whole week of Super Bowl festivities together. All of our husbands and significant others will always have the friendships created and bonds that were made that week.  The town was crawling with people and activities.  We could feel the buzz of it all.  We signed autographs and participated and danced at event after event.  It was exhausting and exhilarating at the same time.  I knew to cherish every moment because not every cheerleading team gets to attend the Super Bowl.

Then there was the parade when we all returned from the Super Bowl.  750,000 people lined the streets of Denver that day. I had never seen so many poplin one place. It was surreal.   And I got to ride through the middle of it all with the Denver Broncos and my DBC sisters.  What an experience!! 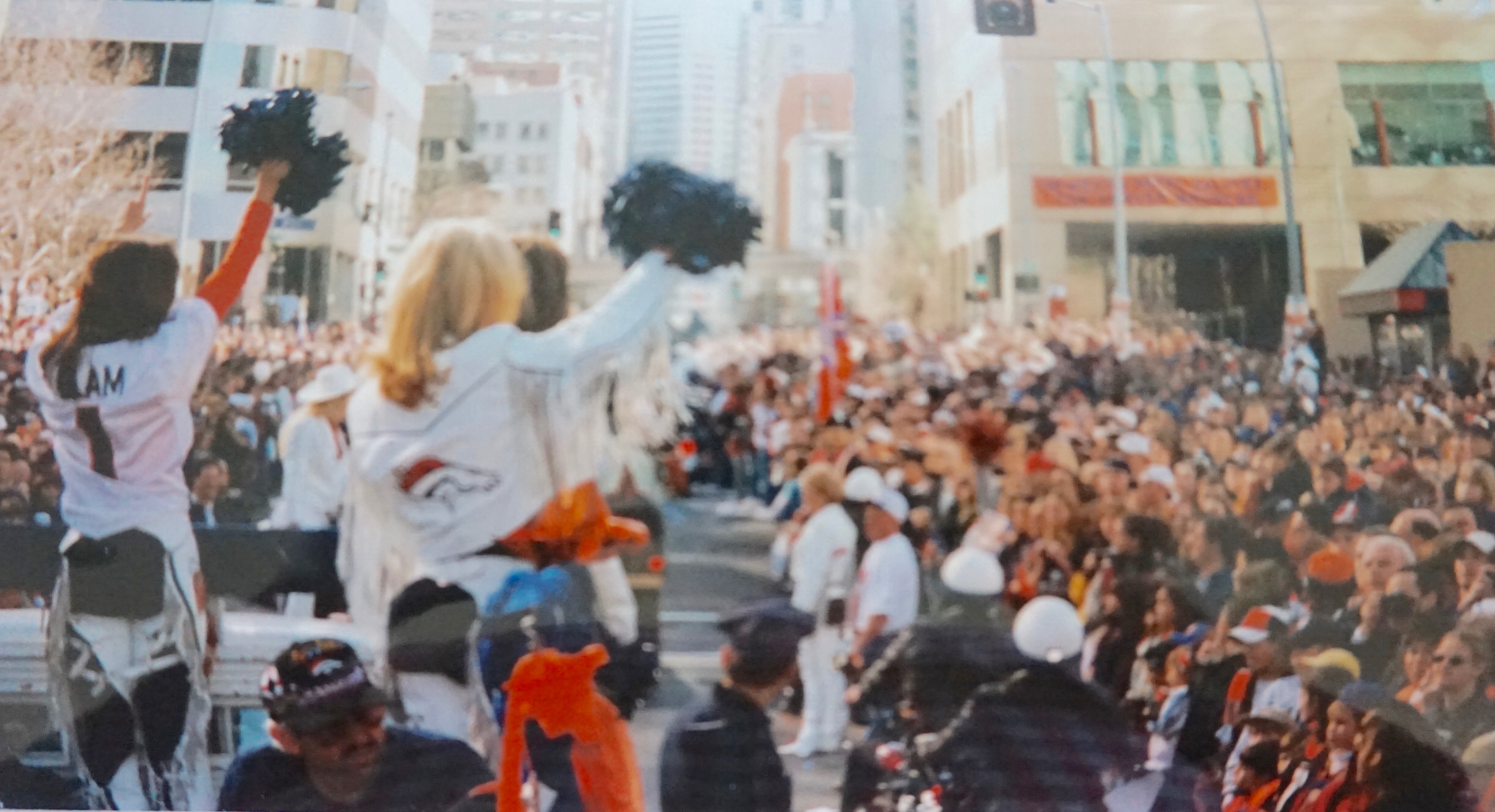 I want to encourage you to go for your dreams.  Shoot for the moon.  Even if you just reach a star it’s further than you were when you started.  And… you just never know.  I am so happy to have these memories. I am so happy I tried.  This life experience was worth every late night practice, every babysitter, every hour running routines again and again, every drop of sweat and every sore muscle.  The friendships and bonds created by this very unique sisterhood is one I will cherish forever.   This weekend I went back to Denver for an alumni reunion.  You can see that whole experience here.  I was so excited to reconnect with everyone.  We had rehearsals just like we used to and performed at halftime.  It was an exciting thing to be a part of and I am so glad that I can share it all with you!

your home is your happy place. It is a place for memories, for family to gather and to rest and I want to LOVE my home. Here is where I share my love for all things home, entertaining, decor, the power of DIY and tips and tricks for pretty + practical living along the way. Together we can make our dreams come to life, one small (or big!) project at a time! Follow along on IG for daily inspo @aprilcolleen. Visit about me to find out more.