I am still finishing the basement over here and dreaming of a way to DIY my banisters for $500!

Finishing those banisters has been probably the most intimidating thing I have ever done.

It requires finding something other than a 90 degree angle.  I was never really good at geometry and this task required my protractor skills to be sharp.

When we built the house I knew that I wanted to have wood railings with iron balusters so I had them just finish half walls (or pony walls).

“I would do it later” due to expense.  That sounds really awesome in the moment.  But then the actual moment comes when you have to do the work and you regret ever saying it.

I would never be crazy enough to attempt to finish the stair railing if it was in the entryway or on a large staircase, but again, I thought “how bad could it be?”.  Famous last words. 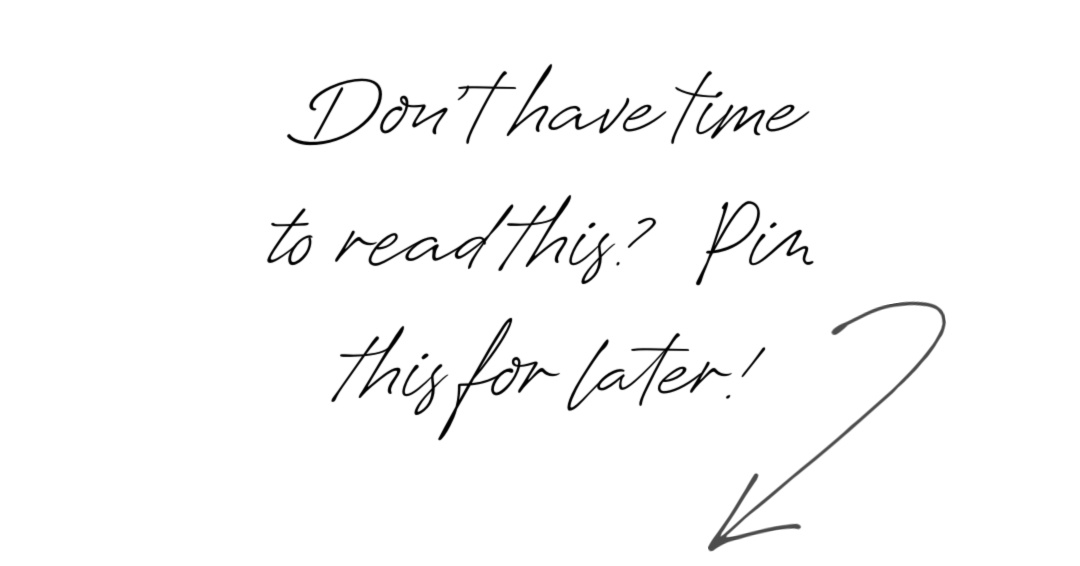 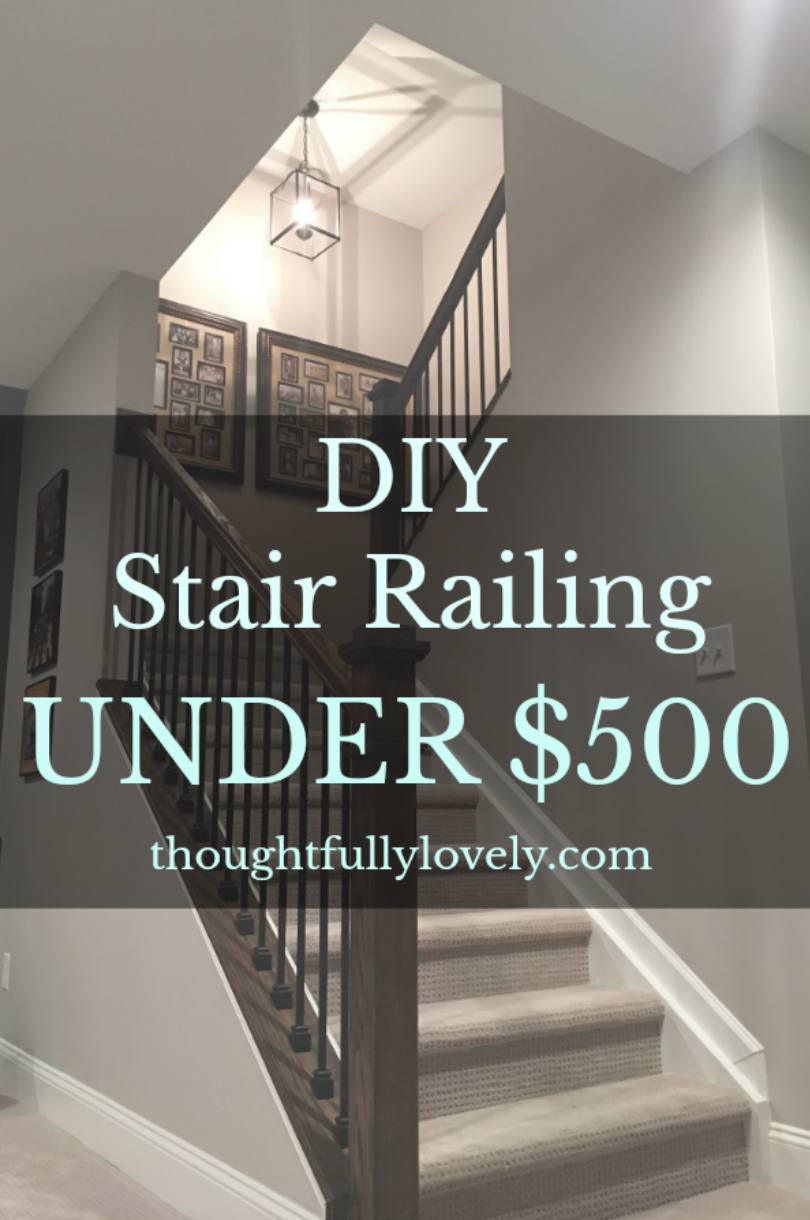 I started by taking the half walls down with my reciprocating saw. That was the easy part.  Tearing things apart is always the easiest part of any renovation.  I took my walls from a pony wall to a knee wall and I was left with a gaping hole on one of them.

I added a temporary board on top to get through the holidays when everyone was home and our family was in town so nobody would break their leg by accidentally falling into the hole. 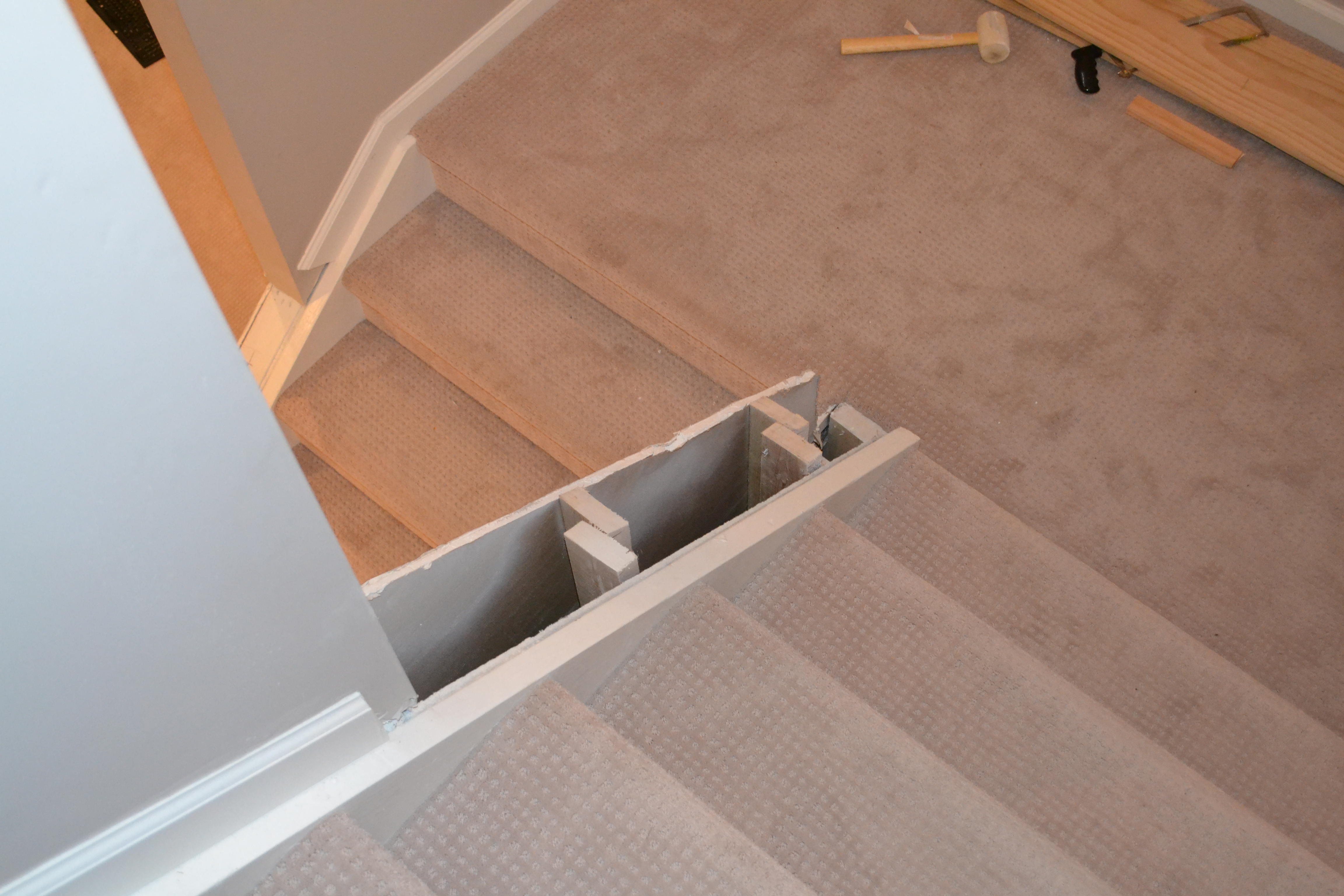 Once the holidays were over and the kids went back to school I replaced the temporary piece of wood with a solid piece of oak on top of the stair skirt which is called a knee wall.

The cost was about $80 for the two pieces I needed for each rail section.  This would anchor the iron balusters.

I could have used a less expensive wood but our stairs on the main floor are oak so I wanted to carry the same color and theme into the basement so they didn’t look like an after thought. 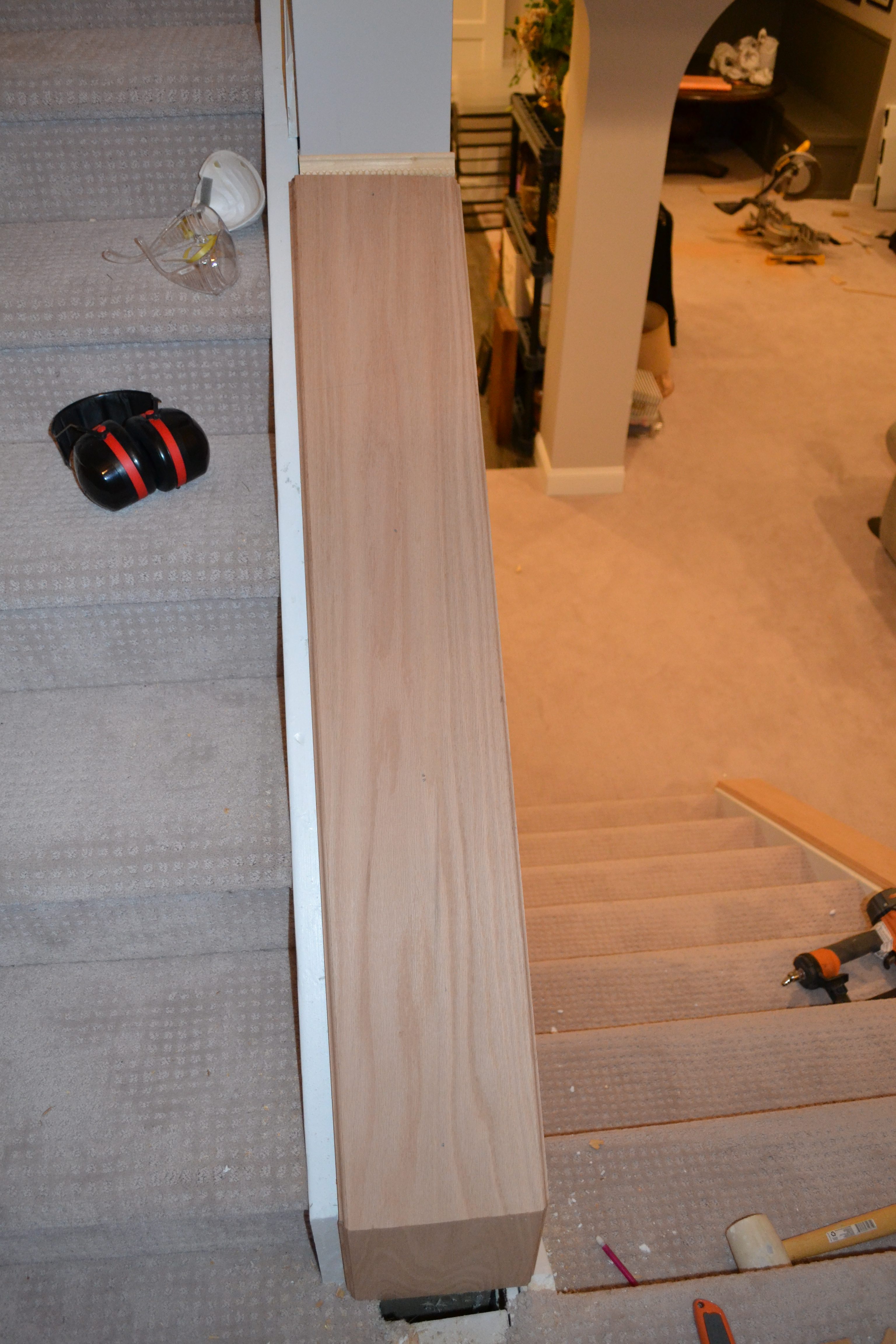 I had to find the angles of the two ends of the board on the knee wall.

Want to do this project yourself?

I had to use my track saw to cut down the boards to the right size.  You could use a table saw, too.

Then I took my router and created a nice, decorative edge on them.  By making them myself I save a lot of money. If you don’t have a router, or don’t want a decorative edge, you can leave them straight!  OR spend the extra money to buy them with a decorative edge

Finding the angles was the worst and hardest part for me.  And one angle isn’t the same as another.

So let’s talk about how I got the angles just right!

You should have an angle finder. I use this one.

Lay one side of your angle on your knee wall and the other on the short wall going to the floor.  It is obviously going to be more than a 90 degree angle so it will be an obtuse angle.

How to find an angle ~ THE FORMULA:

The number on the angle finder ÷  2 = ? (whatever your number ends up after dividing by 2)

Those two angles of 22.5 will connect together and create the angle for your two boards to come together and meet perfectly.  FILL IN ANY NUMBER FOR THIS FORMULA AND IT WILL WORK.  You can do this! 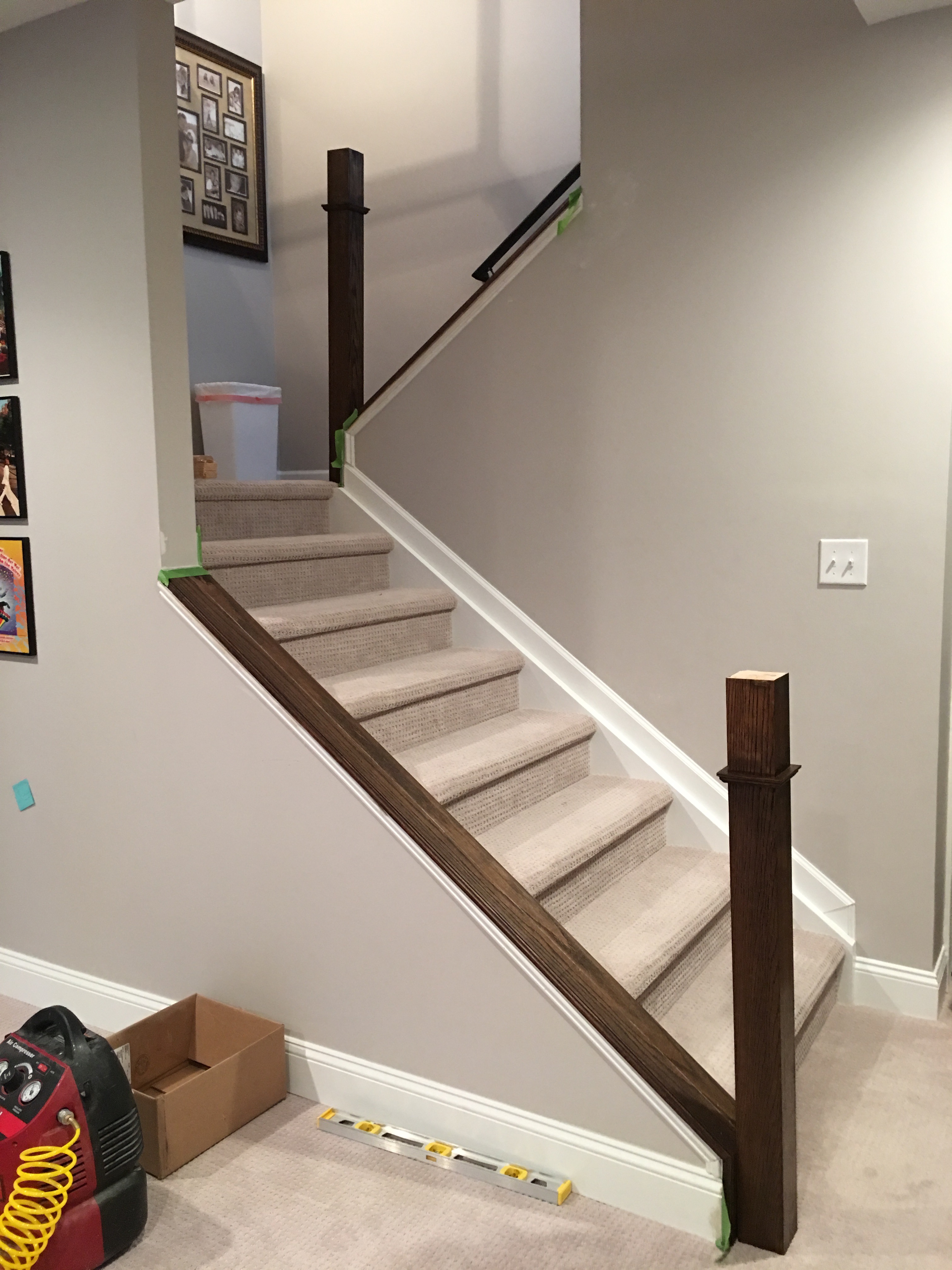 I ordered some box newel posts off of eBay that cost $60 each.  A LOT less than the ones I can order at Home Depot.  I cut them down to the size required by code.  (If you are doing railings yourself, make sure that you check your state building codes.  Your banister has to be a specific number of inches off the steps and balusters have to be a certain number of inches apart.)  I used REALLY long screws to attach them to the skirt.  I stained everything and was so excited to see it all working out.

Next up….hand rails.  You see the piece that is on the wall that the top of the rail goes into?  It is called a rosette and I made it. I made two…one for each set of stairs.   I could have bought them at the store, but I had some left over oak so I cut and routed my own.  It was really easy and saved a little money. They were installed by using liquid nails and my nail gun.  I also bought this 12′ hand rail at Lowe’s for $75.00.  It was a really good deal!  But at 12′ it was too long for the car so we had to strap it to the roof and pray for the best as we got it home!

It took me a while to work up the courage to cut it.  Again….angles.  I took an extra scrap piece of 1 x 2 and cut it to the right dimensions.  It allowed me to get it perfect and work out all the kinks before cutting the actual rail.  A very inexpensive way to make a template.  I transferred the angles onto the rail and then I held my breath as I cut….they turned out perfect!  Whew!  I stained them after they were installed.  I used angled holes to screw them into the rosettes and the newel posts. (Please excuse the Instagram photo…it’s all I had!)

**TIP:  Start the angled hole straight up as you would a regular hole with your drill bit and then slowly start to angle it as you progress to turn it into an angled hole into the wall or rosette.** 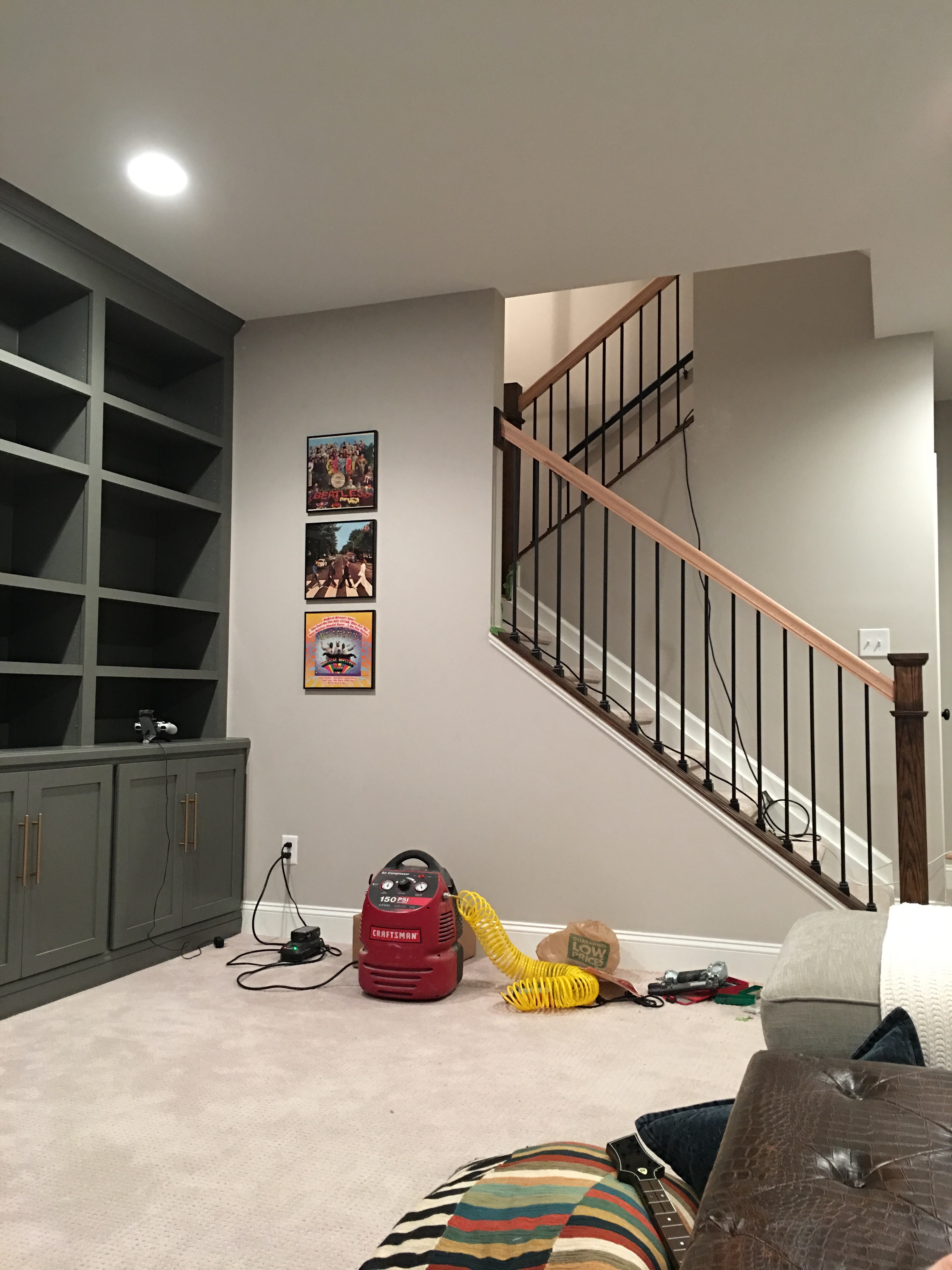 Next up?  Iron Balusters.  We have simple knuckle and straight balusters upstairs so I decided to put simple, square iron balusters in the basement.  I also ordered them from eBay for about $120.00.  Typically when you order iron balusters you also order angled shoes to go at the bottom of each one to cover the holes.  I ordered them and they are so simple to install.  The balusters came a lot longer than I needed so I got a special blade for my recip saw to cut metal and my husband cut them down to the correct length for me because he is stronger than I am and it took a little more force to cut them down.  We clamped the baluster to the table and cut them down individually.  You could use a jig saw if you have a metal cutting blade or a multi tool as well.

Now I had to drill holes into the hand rail and the oak skirt board at the bottom for the balusters to fit into.  It took a lot of measuring to find exactly where they should be according to code.  First, I drew a chalk line in the center of the oak skirt board from the top wall to the bottom box newel.  Then I marked where the balusters were to be placed, 4″ apart according to Indiana code. (Remember, each state code may be different.)  I then drew a line in the center of the underside of the hand rail.  A little tricky after it is installed. From every 4″ mark I made on the oak skirt board, I took my level vertical and made a mark on the underside of the handrail.  I referred to this video and it was SO helpful!  I drilled the holes.  Something I learned is that you don’t want them too deep or your baluster will wiggle around and feel loose.  Add a piece of tape or use a stop block to your drill bit to indicate just how deep you want to go.  I wish I would have done that.

I dry fit the balusters  to make sure they were just right and took them all back out and then stained the hand rail in place. That way I could stain it all at once.  Once that was dry, I inserted the balusters, glued them in place and tightened the angled shoes.  I stained little oak plugs and covered the holes where I attached the boards, newel posts and hand rails.  I am so proud of myself and so excited to see that it all came out exactly as I planned!!! 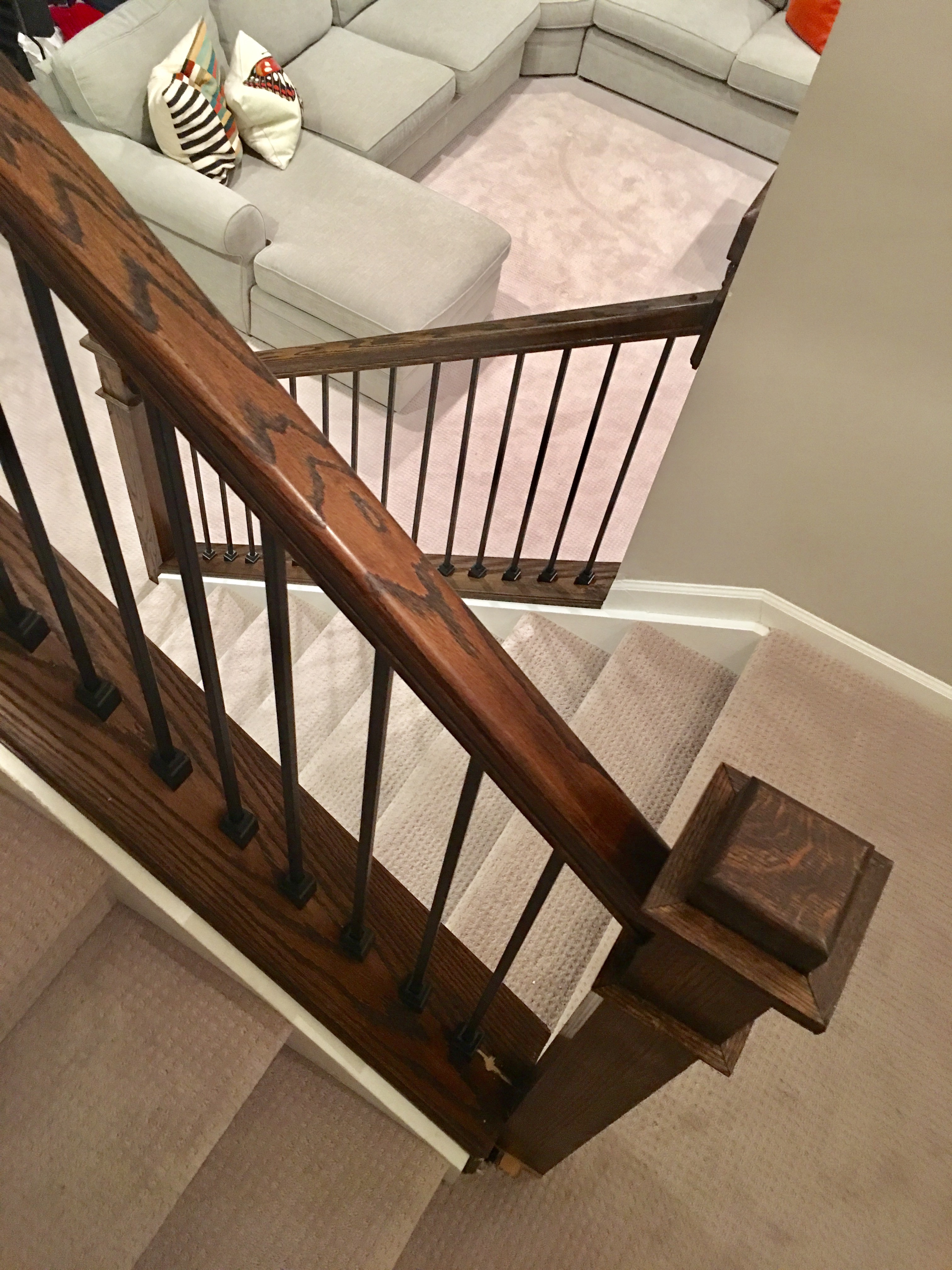 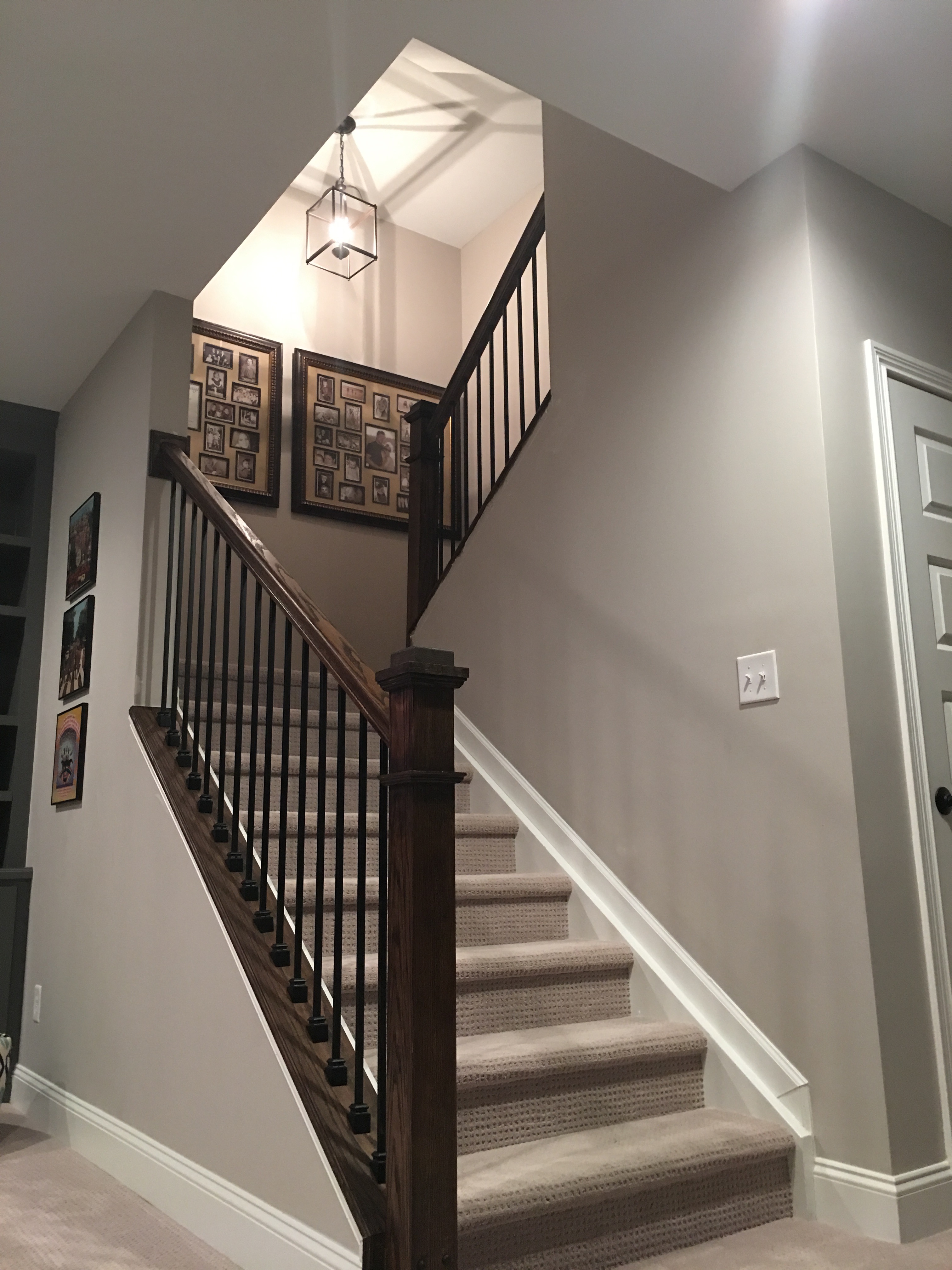 I can’t believe the cost!  If you have someone do it for you, the real cost is in the labor and it will be $$$. I could have used Poplar which would have saved me even more money as it isn’t as expensive as oak.  So, there’s another tip!  I still have some touch up work but will do all of that once the big projects are done.

I do a lot of my DIY because I want to be careful with my dollars and also because I love to learn new things and be challenged.  The knowledge can be applied to projects over and over and I love that!

Do you think you would be nuts enough to attempt creating your own banister? I would love to hear about and see your hardest DIY projects!! Leave a comment below and tell me about it.  If you have questions about this install, feel free to email me.  Have a great week!